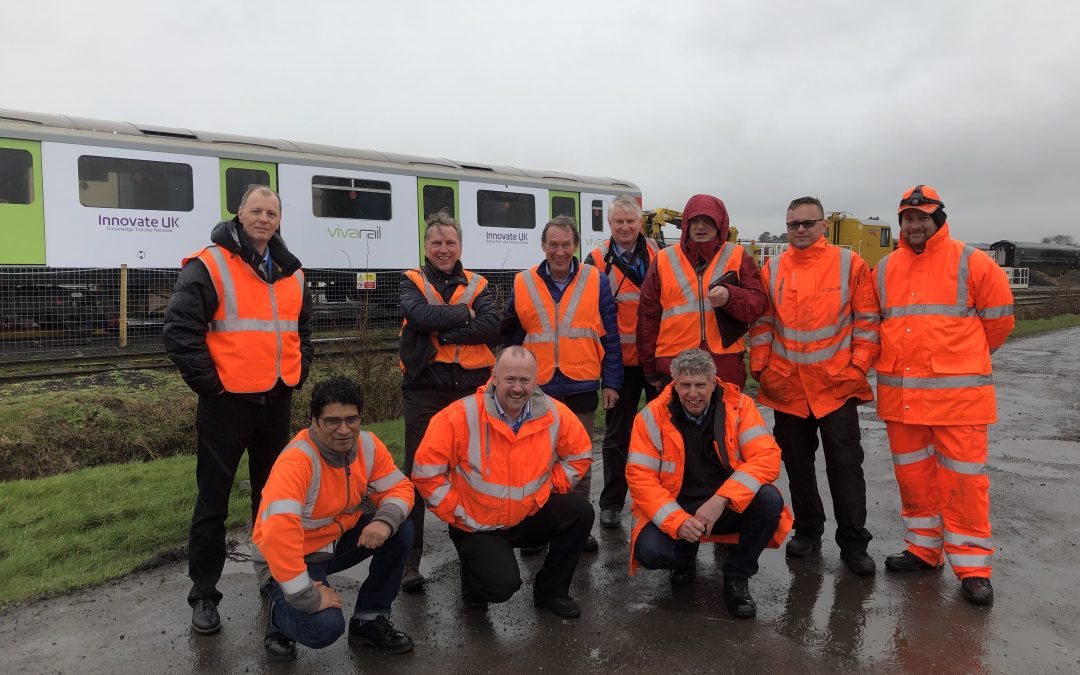 Vivarail today announced it had successfully demonstrated the capabilities of its patented fast charge system to the Department for Transport and InnovateUK. The demonstration marked the conclusion of a 12 month project supported by a grant from the Accelerating Innovation in Rail 4 competition, funded by the Department for Transport and delivered by InnovateUK to develop new technology.

Vivarail is the only UK company with an operational battery train with a range of 60 or more miles between charges and the accompanying charging system.   The train and the system combine to give owners and operators a working emission-free train available today. Adrian Shooter, CEO of Vivarail, said “Having procured, operated and maintained trains over many years my aim with the Class 230 has always been to build a train that delights passengers and operators. I know how important it is to the public and the industry as a whole to phase out diesel units and our battery train is paving the way for that to take place today not tomorrow.  This train can be easily brought into service saving huge amounts of spend on electrification and infrastructure.

“I was delighted that InnovateUK awarded us this grant last year and I am extremely proud of my team, led by Pete Mason and Paul Soor, who brought this brand new system to fruition in such a short space of time.”

Kelvin Davies, Innovation Lead for Rail at InnovateUK said “We know that travelling or moving goods by train is more sustainable for the environment. Yet the challenge remains to encourage new technology and new thinking to make it ever more environmentally-friendly. What the Vivarail project team have achieved is extremely encouraging in supporting the delivery of battery-powered rolling stock in the UK. Exploring the opportunity offered by this technology is crucial in delivering the Department for Transport’s future national rail strategy, supported by Innovate UK. As we move away from diesel traction the expertise developed in this project will promote the UK as being at the forefront of this exciting growth area.”

Vivarail previously ran the Class 230 battery train as a passenger train on the Bo’ness & Kinneil Railway with the support of Transport Scotland and Scotrail in October 2018.  That trial demonstrated that the battery train was able to provide a reliable and consistent service and proved that the electronic control systems were fully functional. The development of the accompanying fast charging system means the trains have an extremely wide application across the country.  The system comprises short sections of 3rd and 4th rail which connect to the train via shoegear.  The train pulls to a stop at the terminus and the shoegear connects to the rail to draw the current at an extremely high rate which is crucial as it ensures the train continues to meet timetabling demands.

Due to the high currents required for the train Vivarail uses a carbon ceramic shoe able to withstand the heat generated in the process – without this shoe the charge time would make operational running unfeasible.  As well as the rate of charge Vivarail also needed to develop a safe method of connecting the power source to the train.  The sections of standard flat top rails mounted on insulators is a development from a traditional 3rd rail design but critically are not live unless the train is in situ.  The driver simply needs to stop the train and the connection takes place automatically without the need or complication of manual intervention. Charge times can be as little as 7 minutes even for a 60 miles journey for the train to draw enough power to run daily services.  The train’s range of over 60 miles between charges gives operators a wide choice of potential lines to run zero emission trains.

As well as range and speed of charge the main hurdle facing battery train implementation is the ability to access a suitable power source.  Unlike electrified trains or trams a battery train needs to draw a lot of power in a short space of time which can cause problems with the electrical supply with peaks of demand rather than a continuous low-level draw.  To overcome this Vivarail has completed the suite of equipment with a battery bank.

This bank consists of packaged second-use batteries and is connected to the main grid to trickle charge itself continuously.  It is the power stored in the battery bank that is then ‘dumped’ into the train in the short time available. The train, fast charging system and battery bank combine to give a simple yet effective solution to removing diesel trains from the UK network.   The three elements mean the train has a wide range of applications on many different lines where range or power availability have previous meant diesel units were the only feasible option.  Now Vivarail has demonstrated that a battery train is a perfectly viable solution: a zero emission unit with acceleration of 1m p/s/s bringing shorter journey times, particularly on stopping services.

The Class 230 battery train is a market-leading innovation and Vivarail’s patented technology means the company is able to provide the whole package for owners and operators today.